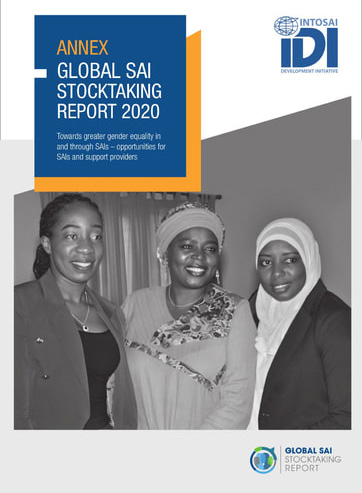 On December 10, 2021, the INTOSAI Development Initiative (IDI) launched a special Gender Annex to the Global Stocktaking Report 2020. The Annex—Towards Greater Gender Equality in and through SAIs – Opportunities for SAIs and Support Providers—examines the commitments Supreme Audit Institutions (SAIs) have made on gender, and how these commitments have translated into action.

The analysis of responses from 178 SAIs tells a story about an SAI community where the gender composition of staff is balanced, but where efforts are needed to promote women into leadership positions. Women comprise only 29 percent of Heads of SAIs, and 39 percent of senior management in SAIs.

This gap may be due to the fact that the strategic plans of fewer than one-third of SAIs include measures on gender equality. In fact, fewer than 10 percent of SAIs have undertaken a gender analysis to inform their strategic planning, which indicates that the knowledge base for identifying appropriate strategies is also lacking. The African Organization of English-speaking SAIs (AFROSAI-E) and Regional Council for the Training of SAIs of Sub-Saharan Francophone Africa (CREFIAF) regions are champions in promoting gender at the institutional level.

In terms of audits, only 21 percent of SAIs have committed in their strategic plans to integrating issues of gender into their work. Similarly, only 24 percent of SAIs undertook gender audits during the period of 2017 to 2019. The bulk of these were audits of United Nations’ Sustainable Development Goal 5 on gender equality carried out by 70 percent of the SAIs in the Organization of Latin American and Caribbean SAIs (OLACEFS) region. A meager 14 percent of all SAIs globally have started mainstreaming gender in their audits.

These results suggest there is a need to build SAIs’ capacity to improve gender equality. Yet, only 23 percent of SAIs have

committed to developing staff capacity on this issue, and fewer than 10 percent of SAIs have received capacity development support on gender in recent years.

Interestingly, many of the 25 percent of SAIs globally that plan to build capacity in gender in the coming period are from the AFROSAI-E, CREFIAF, and OLACEFS regions. This tells us that SAIs already doing work on gender more clearly appreciate that, if they are to become more gender responsive, they will need to systematically develop capacity across their institutions.